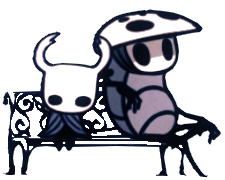 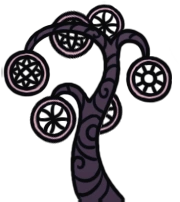 Meel documents his hollow knight playthrough. This log is meant for people who have already played the game in full and want to see me waddle through it. Spoilers, obviously.

First of all, I finally beat hornet. I just picked up the game and started fighting her and beat in four tries!! im so proud of myself! She seems to be my ally now, and i also have the kings crest which implies that i am now king. I killed all three dreamers in two days. I honestly expected the dreamers to be boss battles but no, you just find them and beat them up. So i have access to the end of the game, the Hollow knight battle. I realize that after beating him the game ends and im only around 66 percent done so i'm not gonna do that quite yet. I plan to 100% it before I fight him. I still have lots of questions about the dreamers, like why did they want me to kill them and fight the hollow knight? and why do they say that i'm the only hope for the future of hollownest? a ton of questions that i'll hopefully learn or look up after i finish the game.

It also looks like my theory about Quirrell was right. He had the face for one of the dreamers and was drawn to her because of it. He mentions that he has a feeling that he has been here (in Hallownest) before and Hornet also mentions that the player was born in the Abyss, (another new area i discovered, its creepy.) so it makes me wonder. Are my memories also wiped like Quirrell's? Or is the player aware that they were born in Hallownest and thats why they choose to visit it? Currently i'm focusing on exploring the entirety of Hallownest since it seems i've discovered all areas, and I'm also working on beating all the dream warriors. Even though i'm technically at the end game now, I still have a lot to do. Also i hate the hive AND deepnest. Both are hell and i will kill everything in them.

+ the queen's gardens get!

During my neocities break, i played lots of hollow knight. i havent't played in a week or two by now though so i might not list everything i did but i have found lots more areas like the ancient basins and the kingdoms edge. I don't know why it took me so long to find the item in crystal peak that makes you zoom across large holes but i found it finally and was able to get the monarch wings and defeat the ancient basins boss which i cant remember the name of right now, the super infected one. I have been trying to beat Hornet again in kingdoms edge but its been like three weeks so ive been doing the colosseum of fools. I'm currently on the second one. I think upgrading my nail from the rewards you get from the colosseum will really help me beat hornet. I can get past her first stage just fine but its when she starts summoning the spikey balls that I trip up. Also, the forgotten crossroads have been infected! messed up! So many things are blocked off and its reaaally annoying >:( plus the enemies are stronger. aaagh.... im so sad. all the poor buggies.... and poor Myla, I ACCIDENTALLY KILLED HER!

anyway... i haven't had a lot of time to play games now that school is back in session but ill still find time for this game. its the main thing ive been playing next to identity v. i will beat hornet someday i hope....

i finally defeated elder hu! i also discovered the city of tears which is probably my favorite area so far. its so pretty and relaxing to run around through. rain is my favorite so its only natural id like a nice gloomy rainy area the best. i found the royal waterways too, which im trying to access the bench in and defeat the dung guardian. his attacks are easy to follow but i keep getting caught up at the end and im getting sleepy so ill do it later. its been a while since i found any new areas so this is very exciting ^_^!! theres also this weird spider guy i gotta beat in the forgotten crossroads but hes annoying and this is more fun!!

screenshot taken by me :]

the enemies in the royal waterways are super freaky, i hate those worm guys, flukeworms i think they are called? i hate how fast they are and how they split into two and the gross noises they make i HATE THEM!! not a fan of any of the enemies besides the pilflips, those guys are cute and not annoying. i think i still have some unfinished buisness in the crystal caverns... ill have to go back there too later. this game always keeps me on my feet, never a moment of rest.

to end this entry off, i found something today that i thought was interesting. there was this fountain-statue thing, Hornet came down and talked to me about it. it said it was called the memorial of the hollow knight (i could be wrong, i saw this hours ago and i dont remember lol) and Hornet said something about it being the reason Hallownest still exists. I was under the impression that the player was the hollow knight, you know because we are basically a little knight and we are a little bug so our shell head is hollow. But that doesn't seem to be the case, the hollow knight is another character or concept completely. thats what it seems to me at least. Oh and last minute addition, i noticed Quirrel has the same mask as one of the dreamers. I feel he could somehow be connected to them. i dont think hes one of them but he has some kind of connection. i hope i can learn more.

+ city of tears get!

Waaahh... elder hu is sooo hard. He should be an easy boss in theory but for whatever reason I cant beat him. I have his attack pattern down but i just do it. I had a similar problem to the crystal guard at the bench in crystal peaks. god, maybe im just bad at video games. These are like, minibosses for crying out loud!!! I might just abandon elder hu for now and focus on other things. Theres two other bosses i havent beaten yet that would be good to get to. Plus I think they are more important to the story, which i'm honestly SUPER invested in. Fun gameplay and interesting lore, two reasons why you should get this game right now.

Whew, i wish i made this when i first started playing but its better now than never. Basically, I really dont know anything about this game. I knew nothing about it when i got it, have been avoiding spoilers at all costs, and i have not interacted with the fanbase at all so yeah, my knowledge on it is limited to what ive played so far. That means im not sure how far i am in the game right now, so i dont know how long this log will last but i have a feeling it will be a little while. im probably gonna theorize a lot and complain about how hard this game can be, hehe.

currently i have beaten hornet in greenpath, gotten the ability to wall jump + dash, and i am currently exploring the crystal peaks and fungal wastes. im spending most of my time in the wastes right now though because i dont like the peaks that much, plus theres a boss there that i want to beat to get dream essence. i also am going to go back to greenpath sometime since theres some areas i havent been yet. im really enjoying this game so far. the art is gorgeous and im super invested in the lore. plus its just really fun to play, obviously. i hear theres going to be a dlc or something for the game soon called silksong which is also exciting, but it seems to have been in development for a couple years so who knows when it will be here, if it even will?