If you know me or have been following this site for a while, you're probably not suprised to hear me talk about this game. After all, this whole site was originally themed after one of the locations featured in it. I was super obsessed with it in 2020, and although its not my main interest at the moment, it holds a special place in my heart even though it's far from the perfect visual novel that i saw it as at the time. this will be a review of the game. (first two bonus chapters included) which will also contain light discussion (and spoilers) of wolf game.

First of all, what's the game about?

Zetsubou Prison is a Puzzle visual Novel game by Studio Wasabi. It's about an amnesiac teenager named Noboyuki going to a new highschool as he is hunting down beings called Doppelgangers for the wardens of the Zetsubou Prison, Kyodo and Nekohiko. Doppelgangers are basically a version of a person that is created when something traumatic happens to them or if someone wronged them. They will try to kill or attack the person/people that caused it or is associated with it. Noboyuki hunts down the Doppelgangers for the two wardens in exchange for pieces of his memories. When the doppelgangers are caught, the original person is restored. Noboyuki is also accompanied by his new friends in the Occult club, mainly Fuyutsuki Shirou and Kijou Kisuke. The game is pretty tame, although it has some moments where it touches on darker topics.

Lets talk the pros first, what's good about the game?

The art and designs are great. The images are often compressed or lower quality, but its not too noticable. All the designs are super fun with nice colors, especially on the hair. All the outfits are super unique to the character they are on. everyone in Zetsubou Prison is decked out in colorful, vibrant street fashion and accessories. 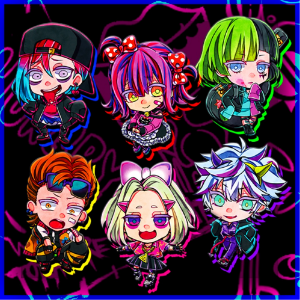 Plus, there are a few bonus outfits you can get in the game that are equally as fun as the character's normal outfit. Studio Wasabi usually has super amazing art but Zetsubou Prison is by far their best work in the design department. Totally reminiscent of harajuku fashion. The art style is also just very charming, but thats just to be expected of Studio Wasabi. Their artists always do a really good job. The sprite animations make my game lag sometimes but they look sick as hell so its chill.

Well, its a game so if wasn't fun to play then what would be the point? A lot of the gameplay is reading since, yknow, its a visual novel. but its not boring. The character interactions are cute and silly, they remind me of how characters in anime talk. some people might not like that cheesy often unrealistic way of character communication but i personally think its fun. my favorite interactions came from Satomi and Kiyoko. The puzzles are also fairly hard to solve (the language barrier might also be a part of that

) and they get you thinking.

What are the flaws?

Copy And Pasting From Older Games.

This is a pretty small and honestly not too noticable if you haven't played studio wasabi's other title, Wolf Game, but once you notice it, its annoying.

Zetsubou Prison reuses a toooon of stuff from Wolf game, from music to assets to plot elements. It has almost the exact same music as Wolf game, with a few tracks removed and added. Which, okay, not that bad. Whatever. I'm pretty sure most of the music is royalty free or something. But then it gets ridiculous when they just took a plot element from Wolf game and slightly changed it? In Wolf Game, there is a hooded figure with a Wolf mask that tries to kill the main protaganist, Yukinari. He also sabotages others throughout the story and is plotting against them for unknown reasons. I don't know why he is there yet because I haven't finished the game, but point is he is there. In Zetsubou Prison, they rip the exact asset of the masked figure from Wolf game and make him almost the same purpose, just a different character and slightly modifed to fit the story. They made the masked figure in Zetsubou Prison the doppelganger of a character that was also trying to kill the main protaganist. Ugh. You had to steal a plotpoint from one of your old games? Really Studio Wasabi. Come on. Couldn't you have at least redrawn the sprite?

Sometimes things in their games will just happen with no later explanation. Sometimes you think it will be answered later but then it never it. This is not in a fun open-ended way or 'you decide what happened' way. It's just leaving such huge holes in the plot and doesn't make any sense. In Zetsubou Prison, one of the characters, Satomi, is trying to to stop a perverted teacher from spying on the girls changing, so his solution is to (This is gonna sound crazy because it is) fill the school pool with blood???? actual blood??? is that the only way he thought of to stop him???? it is NEVER explained where he got this blood or even HOW he got it all in the pool, and the rest of the cast is just okay with this?? Like 'okay this makes sense.' no it doesnt???? this drives me insane, just.. HSDFJKAHFJKD???? Theres a ton of other things like that in the games, characters doing and getting very questionable things without reason, including the ability to teleport objects,

Another plothole is that when the game ends, nothing is explained about the things you expected to explain. For the whole game, you are trying to catch Doppelgangers for the two Wardens of the Zetsubou prison, Kyodo and Nekohiko, but they both already know who the doppelgangers are but for some reason need YOU personally to find them, even though they can just get them themselves. Plus, why do they even need to get them? How do the Wardens have the power to get them? Is there any deeper meaning or explanation for all of this? No. Nothing is ever explained. This whole thing is treated as something completely normal and not worth finding out more about. I understand that the game is more focused on the relationships between the characters and such but, you can't just have the plot be based around this unique magical concept and not explain any of it, especially when it sounds like you were setting up to explain it all at the end.

All in all, Zetsubou Prison is a really fun game. Studio Wasabi is a very small game development team and its really cool that they are able to make such great games. They're far from perfect, but they're far from awful. I reccomend Zetsubou Prison as well as Wolf Game, a darker Danganronpa inspired killing game of theirs. I'm currently playing through it myself. A review for that game will be coming soon as well. If you found this review interesting and want to play this game, go check its steam page and get it for free. Or if you don't speak chinese and dont feel like going through complicated loopholes to translate it, check out this english translation letsplay.