Monchhichi is a line of monkey dolls from the company Sekiguchi. They have been active since 1974 and still make dolls in the same style to this day. In 2004, they released baby monchhichis called bebichhichis.

I think these dolls are super cute and i have been trying to start a small collection. I currently have four. Its a little difficult to get monchhichis because of the pricing and the fact they are mostly sold out of my country but i still try, often when I have a little extra money that i haven't spent on my other interests... (i buy too much music.) 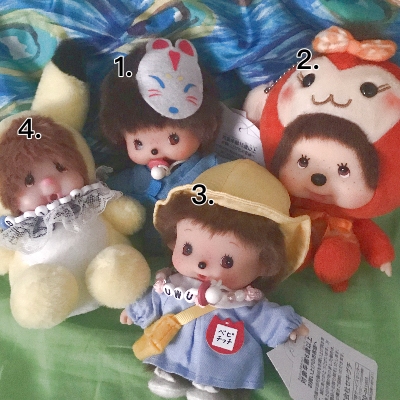 1. Kanagawa. My first monchhichi, named after the painting The Great Wave Off Kanagawa since I was working on a song about it when I got him. He is a 2019 summer fireworks festival bebichhichi.

2. Beebee. I actually never wanted or planned to get her but the website I ordered 1 from wasn't currently shipping to my country (eghhh covid) but if I bought something from their ebay along with my original purchase, they could get it to me faster. So i got this cute little one. She is a bighead monchhichi keychain. shes huge for a keychain, 6 inches i believe.

3. June, named after the month she arrived in. She is a kindergarten bebichhichi, which is the kind of bebichhichi i originally wanted when i first discovered them. Her outfit is so cute, her hat bends a little weird but its okay, no one's perfect.

4. This one is yet to have a name. This is actually a ripoff monchhichi i found in chinatown. I have been visiting chinatown ever since i was young but never had I seen so many ripoffs as I did in that one day i went and got this. it was really funny honestly. this goofy thing was 6.99 lol, cheapest 'monchhichi' ill ever own. She is a keychain so on occasions i will wear her in the belt of my pants. very good accessory 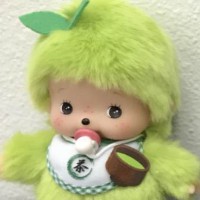 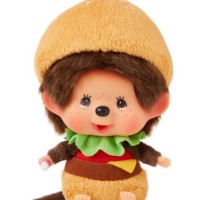 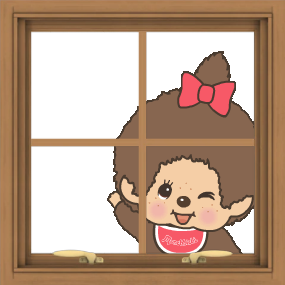