all of these were documented in October 2021.

Nido to Mezamenu Komori Uta (Also called Lullaby To The Big Sleep and The Death Lullaby in english) is a japanese 1985 27 minute film directed by Hiroshi Harada. It's about a child being bullied for his teeth while his small village is going through the effects of an airport being built.

This short film may be a little confusing and meaningless to those who aren't familar with the context behind it, but it's based on the Sanrizuka struggle, a series of protests and riots against the construction of Narita International Airport. In the movie, the unnamed protaganist is being chased down by bullies for most of the times, while in the background, often on TVs and such, news goes on about the building of the airport. Although the story is pretty intresting, I'd say the it isn't the best part of Nido to Mezamenu Komori Uta, rather that role goes to the music and animation. Both are a product of their time and just have a great grainy 80s charm to it, even if not the best quality. (specifally the animation.) And the music is just haunting, especially at the end. You can watch it for free on youtube, warning though its not uploaded in the highest quality. Also the directer, Hiroshi Harada, has made another great film called Midori/Shojo Tsubaki, which is around an hour long. He made everything in it by himself besides voiceacting. I'm not sure if he did the same with this one, but they are both good none the less. Midori also has a really intresting story of it being cut and censored, banned, and barely being able to be released to the public. It still has 6 minutes of content from it missing to this day. Maybe sometime I'll write about it here as well. 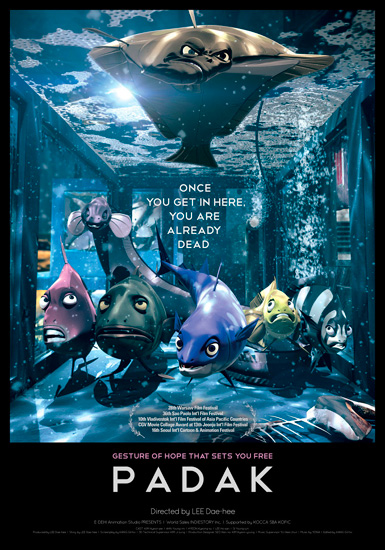 Padak is a Korean 2012 film about a mackarel trying to escape back to the ocean after being caught for a sushi shop.

I found this movie through a review of it on youtube. About 30 seconds in, I decided it sounded interesting and I wanted to watch it myself before watching the review. It was a good choice, this movie is great and I'm glad I didn't spoil it for myself. Although the story takes place in a small fishtank for the majority, its still really interesting and definitely kept me hooked 100% of the time. It was able to effectively show the stakes at risk through squeamish visuals, great dialouge, and characters. I never thought I would be so sad over the death of a fictional fish or two but here I am. Speaking of death, theres a lot in this film. Theres a lot of scenes of fish getting killed by both humans and other fish, its really well animated and makes me cringe just looking at it. I don't eat fish but if I did, I probably wouldn't after this film. (Actually, I watched this with my mom and she said that she never wanted to eat fish again LAWL) Along with the gore in this film, I think the visuals in general are great. I've seen some people say that the 3D animation isn't fitting or that its ugly but I think thats the point. There are some 2D animated parts in this movie for songs and such and although they are gorgeous and well done, I think its good that the main type of animation in the film was 3D. I don't think 2D could capture the same morbid feeling. Also the ending of this movie, wow. I didn't expect it at all. Obviously I won't spoil but god DANG I would have never guessed what would have happened in a million years. It's tragic, but a great way to end the film. Overall, Padak is an amazing film and wil interest those who like dark and engaging stories. Watch it!!!!! You can buy it on steam for $2.99! (yeah, i didn't know steam sold movies either.) Here's my favorite song from the movie. Its very catchy.

Perfect blue is a Japanese 1997 film directed by Satoshi Kon. A pretty famous movie, wouldn't be suprised if you've heard of it. Its about an idol named Mima giving up on her career and becoming an actress whilst being stalked and slowly losing her sanity.

Probably the most famous movie on this list. Perfect Blue had been on my radar for a while. I've seen screenshots of it floating around but I became interested in it when I saw a DVD of another movie (Paprika) by Satoshi at a library. I thought 'hey, this is the guy who made that one movie, isnt it?' I wanted to watch this one first since it was more popular. I went into knowing nothing about it but wow, it blew my expectations out of the water.

It's so incredibly well done. It gets a bit confusing at some parts but the end of the movie explains everything terrifyingly. I'll try not to spoil but something is revealed about Mima's stalker that completely changes the context of the previous events of the movie. It pulls everything together wonderfully. I also really like the animation. I have a bit of a soft spot for more realistic looking anime styles and Perfect Blue's won me over. The design of her stalker is pretty creepy as well and pulls off exactly what it needs to. Great art and great story! I heard someone online say that Perfect Blue is not a puzzle to be solved but a story to be expirenced. I couldn't agree more. I reccomend it to those who like psychological horror. Note that theres a few graphic/disturbing scenes like sexual assault and a violence. If you can deal with that, you should check it out. Satoshi Kon was a very talented man as well, you should take a look some other things that hes directed! Another one of his works that I recommend is Paranoia agent!